You are here: Home / Outreach / Biogeographic analysis of trophic structures reveals the signature of climate and people 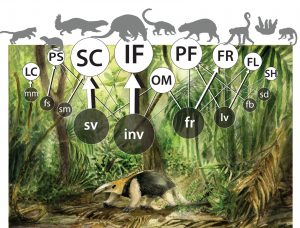 Climate determines the arquitectures of trophic structures and human activities simplify them.

This is the main conclusion of a study published today in Nature Communications, by Manuel Mendoza and Miguel B. Araújo.

Using the geographic distributions and feeding preferences of all terrestrial large mammals, the authors found that trophic communities could be characterised by six main groups. The distribution of the groups is clearly related to climate, offering new grounds for accurately forecasting responses of animal communities to climate change.

“With help of water and nutrients, plants transform solar energy into biomass, such as leaves, fruit, and seeds. The biomass is then consumed by other organisms, such as folivores, frugívoros, and granivores. The starting hypothesis was that the quantity of energy available in every region, which is determined by the climate, limits the types of food webs that can exists therein. The results were surprisingly clear” explains Miguel B. Araújo.

“We analysed the geographical distributions and feeding preferences of all terrestrial mammals with more than 3 kg and found that they are grouped into 6 clear trophic communities. These communities are linked to the climate in which they occur“, explain Manuel Mendoza. “There is an apparent determinism in the structuring of food webs that seems to self-organise in order to best exploit the available resources. Specifically, we found six basic types of trophic organisation that we termed boreal, temperate, semiarid, seasonal tropical, humid tropical and depauperate“, he notes.

The results also reveal that human activities directly affect the trophic structures of animal communities, leading to a reduction in the numbers of coexisting species that expected from trophic-climate relationships. “The depauperate structures are very interesting. We find them in oceanic islands, deserts, and polar regions, but also in regions highly affected by human activities. On islands, it is possible that trophic simplification comes about because the difficulties of dispersal of species from some guilds, that is, trophic profiles. It is also possible, they depauperate community are the outcome of past extinctions caused by human colonisation of the islands.  In fact, that is what we find in some boreal and temperate communities of Western Europe and Northeastern America that display clear patterns of trophic simplification, or tropical communities that are heading towards semiarid state“, explains Araújo. “These results will help project the effects of climate change as well as other human-induced changes in land use on biodiversity, since trophic structures are the way in which biodiversity organises itself to efficiently explore the resources available within ecosystems” concludes MiguelAraújo. 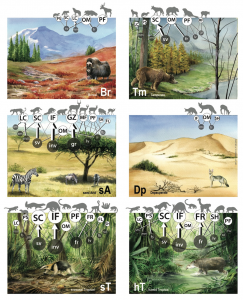