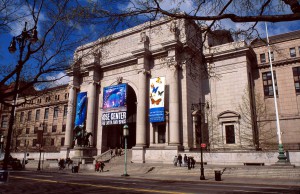 Miguel Araújo, Antoine Guisan, and Town Peterson will provide keynote addresses at the Symposium and Panel Discussion: Frontiers of biodiversity informatics and modelling species distributions that will take place on the 4th of November in New York at the American Museum of Natural History.

The event is part of a task force created by GBIF. Details on the task group and the public event are provided below and in the following link.

BACKGROUND
Pressing worldwide environmental challenges require quantitative modeling that harnesses available data regarding species occurrences. Models of species’ niches and distributions represent one such key tool for biodiversity scientists. However, such analyses depend on high-quality, easily accessible data on species occurrences, as well as approaches for circumventing the taxonomic, spatial, and temporal biases inherent in globally aggregated biodiversity data. In some respects, the field is already well established, but critical challenges mark its frontiers: biotic interactions, intraspecific genetic heterogeneity, dynamic predictions, and the capacity to consider huge amounts of environmental data.

THE TASK GROUP
Towards these ends, GBIF—the Global Biodiversity Information Facility—has convened a Task Group of experts to provide recommendations regarding data fitness for modeling species’ niches and distributions. The group is charged with suggesting both short-term fixes to the current system, as well as visionary recommendations of what GBIF should become over the next 5–10 years. The group began work remotely and will meet in November 2015, hosted by the City College of New York, City University of New York (CCNY/CUNY) and the American Museum of Natural History (AMNH).

THE EVENT
To interface with the worldwide scientific community, the group will hold a Symposium and Panel Discussion on “Frontiers of biodiversity informatics and modeling species distributions” on 4 November 2015 from 2:00–6:00 p.m. in Linder Theater at the AMNH (registration required). Task Group members will present the state of the art in the field (titles TBA) and participate in a panel that discusses directions for future next-generation biodiversity informatics. After the panel discussion, attendees will be invited to continue discussion and brainstorming during a Networking Reception (with beverages and light snacks). Researchers from the biodiversity informatics and distributional modeling communities in the greater New York metropolitan region are strongly encouraged to attend. Additionally, the organizers hope to engage global audiences through live-streamed and archived video of the event, including addressing questions/comments sent in during the broadcast.