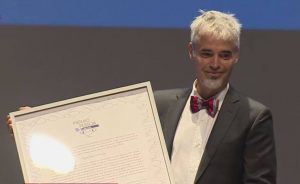 As previously announced Miguel Araújo won the 2018 Pessoa Prize. This is the first time the Prize recognises someone working in the field of environmental sciences.

Named after the famous writer and poet Fernando Pessoa, the Pessoa Prize is recognised as the most important cultural award in Portugal. It was created in 1987 by the newspaper Expresso and the IT company Unisys, and since 2008 the prize is sponsored by Caixa Geral de Depósitos. It is granted annually to the Portuguese person who during this period, and in the course of previous activity, has distinguished him or herself as a figure in scientific, artistic, or literary life.

Read Miguel Araújo’s interview to Expresso after learning he was awarded the Prize.

On the 20th of May 2019 he received the ward by the hands of the President of the Portuguese Republic, Professor Marcelo Rebelo de Sousa. Below some information about the event.

And laudatio of the awardee Miguel B. Araújo by Prof. Marcelo Rebelo de Sousa, President of the Portuguese Republic. See video here.