You are here: Home / Outreach / Species are unlikely to physiologically adapt to increased temperatures

Climate change is altering phenology and distributions of many species and further changes are projected for the 21st century. Can species physiologically adapt to projected climate warming? In a recent “review and synthesis” in Ecology Letters we analysed thermal tolerances of a large number of terrestrial ectotherm (n= 697), endotherm (n=227) and plant (n=1816) species worldwide, and showed that tolerance to heat is largely conserved across lineages, while tolerance to cold varies between and within species. We propose that physiological boundaries exist that constrain physiological adaptation of species to increased temperatures, whereas adaptation to cold is more common.

Probably one of the most important consequences of our results for studies in biogeography, ecology and evolution is that thermal (fundamental) niches are likely to be much more similar among closely species than typically inferred with methodologies that relate geographical distributions of species with aspects of climate. Robert H. Whittaker’s influential idea (underpinning the theory of gradient analysis in ecology and the backbone for much ecological niche modelling applications) that species optima and tolerances change gradually across environmental gradients in unlikely to be true (see Figure below). A more likely scenario is that thermal niches are very similar among species with inter-specific and intra-specific variation being more common near lower thermal limits (second panel in the Figure). If our prediction holds generally true among terrestrial organisms, then it is possible that differences observed between species response curves along environmental gradients (first panel in the Figure) are probably due to the effects dispersal limitation and biotic interactions. That is, climate matters but much variation in species distributions could be due to non-climatic factors (but see other possible interpretations in the article). 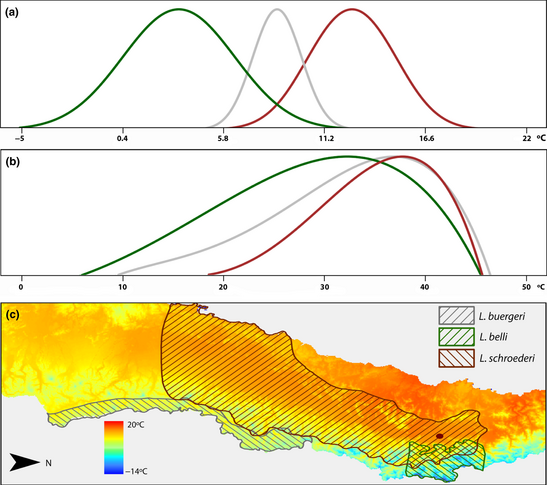