You are here: Home / Archives for Featured

https://youtu.be/DIrNac2Eauk We - Shirin Taherim Babak Naimi, Carsten Rahbek and Miguel B. Araújo - just published the study in Science Advances.  We reviewed 240 reports of climate-related species-range shifts and classified them based on three criteria. We ask whether observed distributional shifts are compared against random expectations, whether multicausal factors are examined on END_OF_DOCUMENT_TOKEN_TO_BE_REPLACED 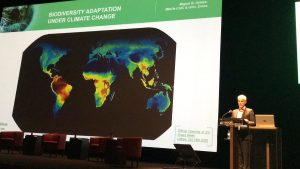 The 19th of October witnessed the Opening of the European Green Week, this year under scientific curation by Miguel B. Araújo and taking place at the Calouste Gulbenkian Foundation in Lisbon. Despite the pandemic situation the event went well with a at least a good hundred of people present in the large auditorium of the Foundation and many more attending online.  The END_OF_DOCUMENT_TOKEN_TO_BE_REPLACED

CLIMATE change is the greatest threat humanity faces – and we aren’t the only ones at risk. Global warming will harm millions of other species, including iconic endangered animals such as polar bears and tigers. Despite this, conservationists often don’t take climate change into account, meaning plans to preserve these species are doomed to fail. “It’s astonishing,” says Miguel Araujo at the END_OF_DOCUMENT_TOKEN_TO_BE_REPLACED

Community trophic structure typical of seasonal tropical climates  https://youtu.be/1WwGVnNFJOY In Spanish here Climate determines the arquitectures of trophic structures and human activities simplify them. This is the main conclusion of a study published today in Nature Communications, by Manuel Mendoza and Miguel B. Araújo. Using the geographic distributions and feeding END_OF_DOCUMENT_TOKEN_TO_BE_REPLACED